At Journey Malibu’s LSD Abuse Rehab, we recognize the dangers of LSD (“Acid”) Abuse, and the toll it can take on those who’ve abused it too often and for too long.

LSD, (d-lysergic acid diethylamide or “Acid” as it is also commonly referred to, is a potent mood-altering chemical in a class of drug known as hallucinogens, and like other hallucinogens such as Peyote, Psilocybin, PCP, etc. LSD has chemical structures similar to those of the human body’s natural neurotransmitters (e.g., acetylcholine-, serotonin-, or catecholamine-like). While the exact mechanisms by which hallucinogens exert their effects remain unclear, research suggests that these drugs work, at least partially, by temporarily interfering with neurotransmitter action or by binding to their receptor sites.
As most people who have used it note, the effects of LSD are highly variable and unreliable, producing different effects in different people at different times, and making LSD Abuse a particularly dangerous phenomenon, as the user can never be certain how the drug will affect them. LSD is usually taken orally – it is often sold in tablets, capsules, and, occasionally, liquid form. Sometimes LSD is added to absorbent paper, which is then divided into decorated pieces, each equivalent to one dose. The experiences, referred to by those who use the drug as “trips,” are long, often lasting up to 12 hours and more.

What Are the Effects and Risks of LSD Abuse? 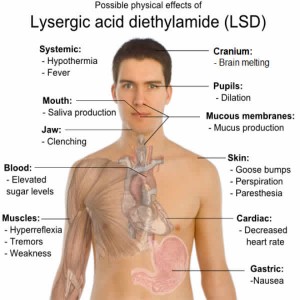 LSD Abuse can cause hallucinations, which are profound distortions in a person’s perception of reality. Under the influence of hallucinogens, one may see images, hear sounds, and feel sensations that seem real but are not. This can be dangerous for a variety of reasons, as reactions to hallucinations may be as distorted as the hallucinations themselves. Some hallucinogens also produce rapid, intense emotional swings. LSD, peyote, and psilocybin cause their effects by initially disrupting the interaction of nerve cells and the neurotransmitter serotonin. (Source: Fantegrossi WE, Murnane KS, Reissig CJ. The behavioral pharmacology of hallucinogens. Biochem Pharmacol 75(1):17-33, 2008.) Sensations and feelings change much more dramatically than the physical effects experienced by individuals under the influence of LSD. Someone on an LSD trip may feel several different emotions at once or swing rapidly from one emotion to another. If taken in large enough doses, the drug produces delusions and visual hallucinations, and one’s sense of time and self is altered. Experiences may seem to “cross over” different senses, giving the user the feeling of hearing colors and seeing sounds. These changes can be frightening and can cause panic. Some LSD users experience severe, terrifying thoughts and feelings of despair, fear of losing control, or fear of insanity and death while using LSD.

People who have habitually used LSD can also experience flashbacks or recurrences of certain aspects of the drug experience. Flashbacks may occur suddenly, often without warning, and may hit anywhere from a few days after use to more than a year following the last use of LSD. In some individuals, the flashbacks can persist and cause significant distress or impairment in social or occupational functioning, a condition known as a hallucinogen-induced persisting perceptual disorder (HPPD).

Most users of LSD voluntarily decrease or stop its use over time, and as such, LSD is often not thought of like an addictive drug since it is less likely to produce compulsive drug-seeking behavior. However, LSD does produce tolerance, so LSD users who take the drug repeatedly must take progressively higher doses to achieve the state of intoxication that they had previously achieved. This is an extremely dangerous practice, given the unpredictability of the drug. In addition, cross-tolerance between LSD and other hallucinogens has been reported. 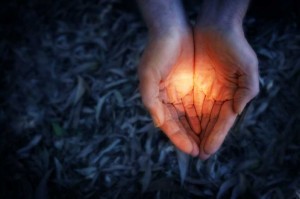 We provide an atmosphere where you can feel SAFE AND SECURE at our intimate, luxurious Recovery Center. Journey Malibu’s LSD Abuse Rehab offers the most effective drug treatment available today.

Treatment for hallucinogen intoxication is often sought as a result of bad “trips,” during which an LSD user may attempt to hurt him or herself. LSD Abuse Rehab during the acute intoxication stage is gentle and supportive: provision of a quiet room with little sensory stimulation. Occasionally, benzodiazepines are used to control extreme agitation or seizures. After the acute intoxication phase is resolved, we will help you work on developing coping skills, addressing roots issues related to your drug use, and increasing motivation for and enjoyment of a life free from mind-altering substances.

According to the National Survey on Drug Use and Health (NSDUH), there were approximately 1.1 million persons aged 12 or older in 2007 who reported using hallucinogens for the first time within the past 12 months. There were no significant changes in LSD use from 2007 to 2008 for most prevalence periods among the 8th-, 10th-, and 12th-graders surveyed; however, there was a significant increase in past-month use of LSD among 12th-graders. (Source: National Institute on Drug Abuse (NIDA)) Perceived risk of harm from LSD abuse regularly decreased among 12th-graders (from 67.3 percent in 2007 to 63.6 percent in 2008). No other changes were significant, but longer-term trends indicate a steady decline in “perceived harmfulness” of LSD in all three grades.

At JOURNEY MALIBU’s LSD Abuse Rehab, we know such changes in attitude could signal a subsequent increase in use, an outcome that would be of great concern since LSD users continue to grow in number, even as the concerns about LSD appear to be on the decline. At our JOURNEY MALIBU RECOVERY CENTER, we stand by ready, willing, and able to treat those LSD users who want to return to a fulfilling life without LSD or any mind-altering drug.

If you’re serious about your recovery and concerned about your use, abuse, or overuse of LSD, we hope you’ll consider making the JOURNEY MALIBU your destination.

Please call us today 888-717-5643 to see if our LSD Abuse Rehab is the appropriate program of recovery for you. If not, we’ll be sure to help you find the one that is. All calls are strictly confidential.